Stocker bottom end
You do not have the required permissions to view the files attached to this post.
Top

That's one of the pics I was referring to earlier .Dan
Top

What's the purpose of the holes in the bottom of the cyls? Something to do with crankcase venting?
Top

its a 4-Stroke Engine above the Piston tops ,
but it acts as a 2-Stroke engine below the Piston ,
example : 300cid 4-Stroke .. is probably moving around 600cid Air in the Crankcase area for the same RPM ,
so holes allow reducing or balancing crankcase windage between all the Cylinders ... free up some TQ and HP
MaxRace Software
PipeMax and ET_Analyst for DragRacers
http://www.maxracesoftwares.com
PipeMax v4.50 Download Link : http://www.mediafire.com/file/4x3fwqub0 ... 0.zip/file
Top

All that internal grinding and main web windowing reduces weight at the front of the car.
Top

its a 4-Stroke Engine above the Piston tops ,
but it acts as a 2-Stroke engine below the Piston ,
example : 300cid 4-Stroke .. is probably moving around 600cid Air in the Crankcase area for the same RPM ,
so holes allow reducing or balancing crankcase windage between all the Cylinders ... free up some TQ and HP

And what’s really cool about those holes venting....it’s not even a Stocker secret idea! Thank GM engineering! I first saw those on the (then) new LS1. In fact I was asking around about those vents while everybody else was talking about the cathedral cylinder ports. Keep threatening to do that to my AMC block but there’s an internal oil line in the block casting that scares me.

While all of us hear about those dang cheaters, or the perception of cheating, you never hear about the absolute dummies that have no real reason to be in the class because there’s just some things that some don’t get! I knew a local guy that built a 340 Dart for Stock and he was convinced the rule book said “stock” in all parameters concerning the camshaft! I mean, he bought a TRW type replacement 340 cam and used that! And when he ran low 14’s in a 10 second class, he went around barking at everybody that would listen about everybody else was a cheater and he was the only legit guy! Obviously he gave up but I hear he’s still bitter.

And we’ve all got stories of watching the full crew of four pushing the Stocker in the lanes and all four are grunting pretty heavily. Wonder why the car won’t ET or MPH?

I have a buddy with one of the fastest under index Stockers. Would you believe an auto trans done right ($$$) can knock off 3+ tenths? Another buddy ran a V/SA car and changing the rear wheel / tire comb to a smaller / lighter set, then gearing it down to RPM the same picked up over two-tenths? Under powered cars like the last two examples are more effected with these kinds of improvements.

I race a clutch car. The amount of ET reductions in a proper clutch set-up and tune is mind boggling.

I’m trying to get another buddy to change his Stocker torque convertor. I am definitely not a TC expert but what I do know is that old “stall it to maximum torque RPM” went out the window some twenty (30?) years ago! He has a 5200 stall convertor on an engine that is shifted at around 6200 and traps at around 6700. I’m about to bet him the cost of a new convertor that he needs a 6000 stall unit (no less than 5800). Plus I recommend to him an ATI to his...well, I shouldn’t mention the brand, but let’s say it’s not the “go to” convertor company in Stock or Super Stock!

There’s so much ET to be found without even opening the hood. Suspension (front and rear), transmissions with different ratios, rear ratios, clutches, convertors, etc. Spend the time in those areas and keep the hood shut will be the best advise I can give.

Stopped by the chassis shop today as I’m back-halving the AMX from D/S to SS/G. Man, I am excited to debut this car! And there’s so much more you can do to a Super Stock engine. Absolutely loved Stock but there’s new territory to mark!
Coming Soon! NHRA SS/G
1970 AMX
390 4-speed
Advanced Clutches
Red Line Racing Cams
Top

It may, but that’s not the purpose. The windows allow the piston and rings to work more efficiently as they move up & down.
Coming Soon! NHRA SS/G
1970 AMX
390 4-speed
Advanced Clutches
Red Line Racing Cams
Top

What the heck's going on here? 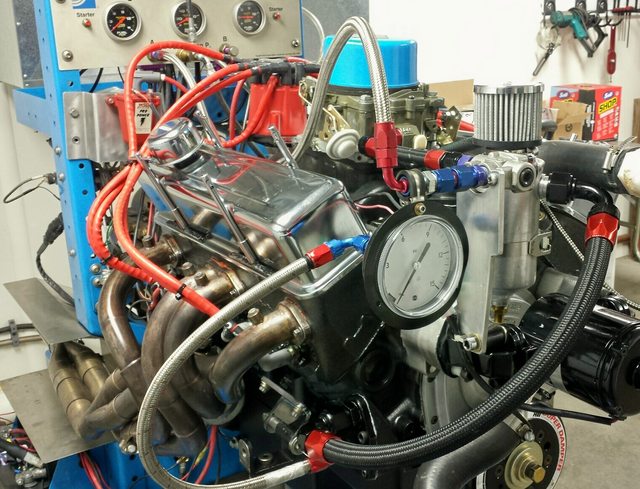 Love the tech side of Stock and Super Stock and it definitely helped me learn a lot that applied to the heads up racing I'm currently involved with - but - (and probably going to get some heat for this) - you still have to use shoe polish and a "dial in" when in competition.

I know about class records, class wins and having to run heads up when the competitor is in the same class but it's still "dial in" racing.

"Quality" is like buying oats. You can pay a fair price for it and get some good quality oats,
or you can get it a hell of a lot cheaper, when it's already been through the horse.

What the heck's going on here?

My guess is they are trying to reference fuel pressure for that carb that looks like a ...(q-jet maybe) to engine rpm somehow. I read in the past where people would find a lot of hp running the pressure higher under WOT so the single inlet could keep up. The would reference the fuel regulator to vacuum somehow instead of the atmosphere. Just guessing though......
Top

Is there something more secret going on in the cam tunnel?
Jim
Top

Sure they are not checking 'Blow-By'?
Top