by Chargermal
I think I know the answer to this - but would like verification.


Trouble is, this seems the OPPOSITE of the tunnel ram principle- where longer tubes move peak tq UP the band.

Why are these two induction systems seemingly in direct opposition to each other?

by BLSTIC
Longer tubes does result in lower tuned frequency. But there are several harmonic lengths available for any particular RPM. The shorter ones have the wave traversing more times than the longer ones. You may be looking at a length where Chrysler product works on the 4th* harmonic, but if you lengthen it just a bit more you get the 2nd* harmonic for a much higher RPM on the tunnel-ram

That or it's all about inertia, and the vaguely wedge shaped column makes for a nice ramming effect, and the longer you can make the wedge the better for cylinder filling between BDC and IVC.

*I can't remember if odd or even harmonics are the "good" ones. But I do know that one is good and the other is exactly what you don't want, and lower numbers give a stronger effect.

by pcnsd
Much of what is written above is correct. I disagree on one aspect but it may be little more than how I define a particular word. (Harmonic)
Every length is a tuned length at some RPM and wave number. The lower the wave number the more energy it contains. There are only pressure waves in intake and exhaust systems according to knowledgeable folk like Gordon Blair. There are two separate intake pressure events in every 720 degree cycle. One at peak piston speed (suction) that can be targeted at some useful rpm to arrive as a pressure event just before at the closing of the intake valve and one that coincides with the closing of the intake valve which can be targeted at some useful rpm to provide increase pressure as the intake valve opens on the next cycle. The valve close event wave is the one used on the Chrysler 300 long ram. I believe is uses the 6th wave. 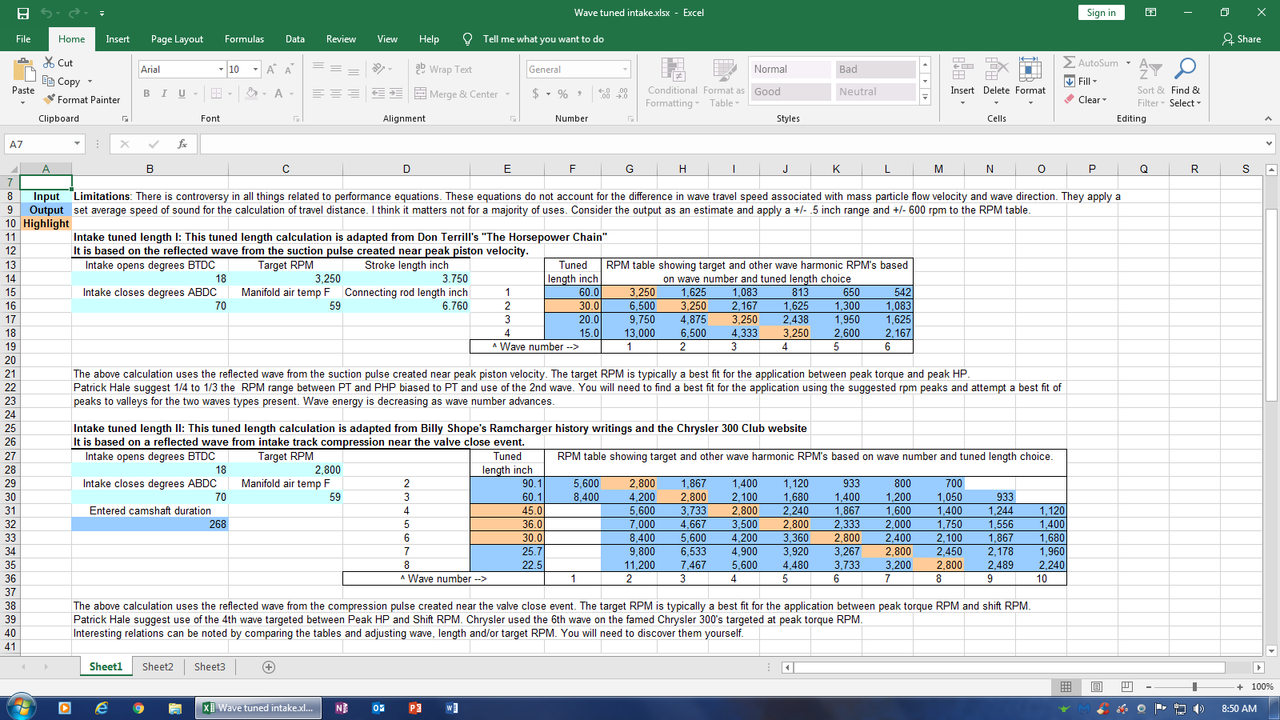 by Chargermal
Thank you. So cam timing has an integral role as well as rpm and length.

by ptuomov
In my opinion, you can’t consider the length independently of the diameter. This is not just acoustic waves. I worked on intake trumpets this summer, with both a simulator and live engines. A smaller diameter shorter trumpet and larger diameter longer trumpet gave almost exactly the same torque curve in the relevant rpm range. There was an optimum, but many length and diameter combinations gave almost the same result across the relevant rpm range, curves right on top of each other.

The other thing to take into account is that a completely straight runner carries the torque curve further out in the rpm range than a curvy/twisted runner.

I think the straight flow path, larger runner diameter, and likely the additional carb all play a role in the perception that tunnel rams make good high rpm power. Not being an expert, just speculating.

by RCJ
With the Chrysler system were the banks separate or was there a common plenum?

by In-Tech
IIRC the Dodge was one long ram per head, don't remember a common plenum. It's been a couple days

Runner length is an interesting thing, and as noted by others in this thread, the runner has to be much larger to achieve the same rpm characteristic with more mass flow.

When runners are long and not tapered to allow more mass flow, it will "stall" the ability for the engine to breathe. It has been noted not just in the Dodge but also the Ford 302 of old and compare the GT40 back in the 90's. The Mercury marine manifolds of old had the same problem, even supercharged.

The newer LS and LT's suffer the same fate, but, they were designed to do what they do

by RCJ
if you look close to under the carbs there appears to be a pipe with rubber hoses clamped to it. If we call it a "common plenum" what is the purpose of it. Ive seen other engines with intake banks separated Then a tube connecting them back together.

my Brother In-Law ( Jim Chauvin - New Iberia . LA RIP ) had a 413cid Max Wedge completey restored w/Ram Induction
at same time Darin Morgan was restoring one , needed 1 more part for 100% restoration,
i told Jim about , Jim had that part, but i don't know if they ever got together about it ??

Jim sold that Car ... next went to completly restored 1966?? Red colored Mustang with White interior,
i don't know what my Sister's going to do with the Mustang yet ?? , still in the enclosed Carport .

RCJ wrote: ↑Tue Sep 14, 2021 10:41 am if you look close to under the carbs there appears to be a pipe with rubber hoses clamped to it. If we call it a "common plenum" what is the purpose of it. Ive seen other engines with intake banks separated Then a tube connecting them back together.

In the Helmholtz equations, doubling the cylinders connected will double the system frequency and reduce the volume required for a given tuned RPM and resonance number. The crossover tube also adds volume which maybe needed depending on the RPM target. More volume = lower RPM.

B4DD31F4-5C55-462D-AD5B-03B4170B63A2.jpeg
The longer and narrower trumpets tune to lower rpms and the way they do it has relatively little to do with acoustic wave formulas, especially if the exhaust pulls a good vacuum during the valve overlap. It’s going to be just the same with tunnel rams, maybe even more so with eight instead of four cylinders connecting to the plenum.
All times are UTC-04:00
Page 1 of 1