I am swapping a 292 inline 6 into my '57 Chevy sedan. The car is a driver. Not a drag car and not a show car. Will occasionally tow a boat trailer.

Here's the issue...... I am putting together a Weber intake and there are clearance issues on drivers side, so must relocate brake master cylinder.

Split exhaust manifolds I am using drop right into the OEM mechanical clutch linkage, so I am retro-fitting a hydraulic clutch setup as well.

I have never been into the custom car  'smooth firewall look' really. But as I must relocate the master cylinder and would like to add a power booster for the brakes in addition to retro-fitting a hydraulic clutch with booster as well...... How do the custom car guys do this (master cylinder relocation off the firewall)? Do they weld brackets onto the frame rails and mount them under the toe board as on pre-55 Chevys?

Any ideas along these lines greatly appreciated.

There is several options for master cyl. mounting systems.
Under the car you can get a midland booster system for power brakes and it uses through the floor pedals for
both clutch and brakes. They use a remote reservoir that mounts up higher to feed the masters.
Depending on the brake lines you have I remember they used a 1/4" line to the rear and 3/16" to both fronts common
on disc. drum combo's Nova/camaro rotors fit the spindles and you can use a 12" rotor from a later 80's impala on the 55 spindle and use a bolt on caliper bracket or just build some.. Just be sure to use s 2lb residual check valve for the front and a 10 lb for the rear if drums.
Real Race Cars Don't Have Doors
Top

Much obliged. That's pretty much what I thought and will look into the Midland setup.

My '57 is a Canadian built car. She's been sitting in my garage here in Texas many years now. Still wears her '76 Saskatchewan plate. Will be replacing brake lines and fuel lines for safety reasons due to age. Planning on retaining original brake line sizing. Fuel lines, I will upgrade from 5/16" to 3/8" from new gas tank with new fuel pick/sending unit up to engine.

Have some new '76 Caprice 12" front rotors and PBR calipers here (these are like Baer calipers). Was going to make caliper brackets for them, but have decided to retro-fit the larger '59 - '64 Chevy drum brakes front and rear along with ceramic linings rather than go with disc brakes for this car.

Hi harry.
Sounds like your build is in full swing.

In regards to your master cyl placement, if its only the master cyl and to move it to get clearance maybe an adapter bracket that swings it 90deg towards fender side and just use a small bellcrank to activate. Saw that idea somewhere that a guy build a big block in some car and needed more space.
If you need power assisted then the booster could be of a space concern again. Dont know how much space you have to work with.

There is also a complete pedal and box setup that is used on some racecars that mounts it under the dash, only problem there is access to the resevoir. remote setup can be used where access is easy. Or maybe firewall mount resevoirs.

Some pics i found. Maybe it can light up a lightbulb on another idea.

Top mount puts everything under dash. On a streetcar space could be limited with speedo clusters.

Floormount can be done with cyl towards driver or towards front of vehicle. Inside or thru bulkhead or under floor,
Racecars mostly have the balance bar for front rear bias so the whole unit is bulky with the added master cyl.


Chevyfreak.
You do not have the required permissions to view the files attached to this post.
Bowtie for life
Top

Thanks, chevyfreak! I will check out those pedal options. Appreciate the idea. Might be able to fit pedals and master cylinders under dash and place remote reservoirs on firewall or even inner fender panel to get the clearance I need.

I have found some remote servo assist (power booster) units listed on Aussie e-bay. Bought one to add between hydraulic clutch master and slave cylinder to help these worn out knees and retain a manual transmission.

This is a VH44 remote mount servo. Plumbs into hydraulic system anywhere it can be fitted. Uses vacuum for boost...... 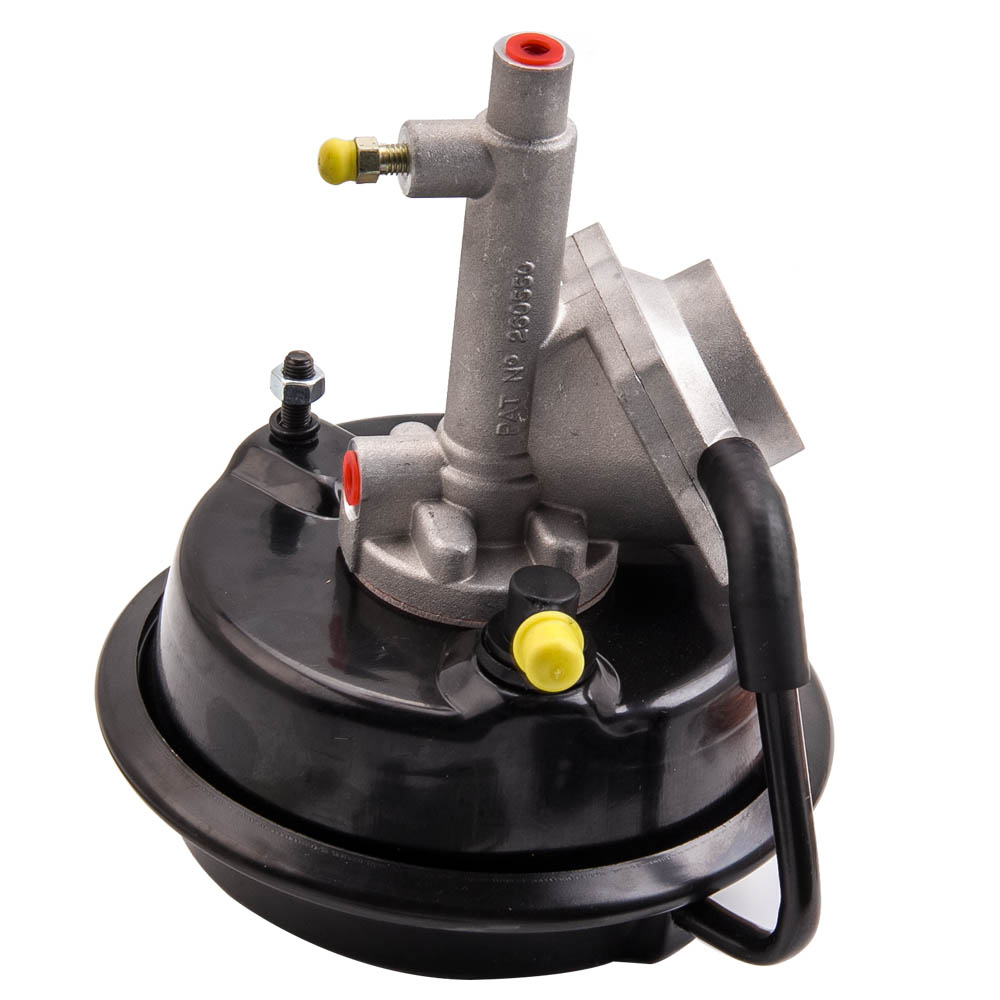 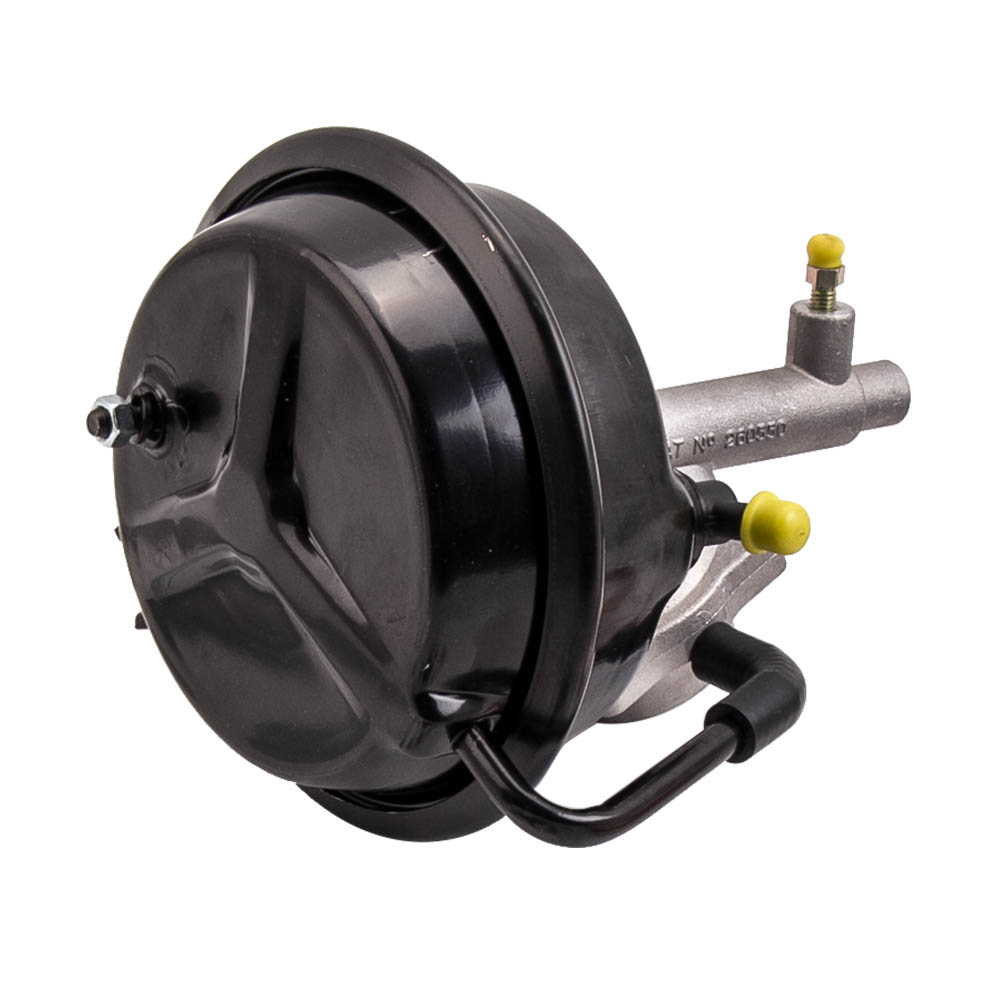 Have you considered a hydro-boost system?

You can buy new, rebuilt, or scrounge something up from various GM models.
It would also be a good excuse to add power steering. If the knees are giving you a hard time then the shoulders can't be far behind.

Ken
Over the hill but still learning!
Retaining it is the hard part.
Top

Think hydroboost as an option.

Also, Chevys, car and truck, came with through-the-floor pedals up through the mid-'50s.

On my custom Studebaker pickup, which came with through the floor pedals, To convert the mechanical clutch linkage to hydraulic throwout bearing, I added a second brake master cylinder bolted beside the original brake master.
Jack Vines
Studebaker-Packard V8 Limited
Obsolete Engineering
Top

Thanks Jack and Ken! I will take another look at hydroboost. The ones I have seen so far have the horizontal cylinder on the engine side. I might be able to use one if it can be mounted so it can be 'clocked' or rotated in such a sway as to put the cylinder over on the side away from the engine. If not, I may be able to work out a way to relocate the hydroboost and master cylinder a couple inches away from the engine to gain some additional clearance. Ditto the hydraulic clutch setup I will be retrofitting.

Here's the issue...... There was insufficient space to mount sidedraught Weber DCOE carbs along with proper trumpets and air cleaners (or a fabricated air box as an alternative). So I modified a sidedraught intake to fit 3 DCNF downdraught carbs. Actually, the modified intake is now the outboard half of a 2-piece intake because the necessary mods to downdraught would have moved the carbs too close to the rocker cover. So I am using an unmodified (mirror image) sidedraught intake as the inboard half and they are bolted together at what was once their DCOE mounting flanges.

This gives me longer intake runners and will 'just' clear the OEM '57 master cylinder but leaves no clearance for a direct fit brake booster nor for the throttle linkage I must fabricate. With this type intake, the carbs must be mounted with their throttle shafts parallel to the inline 6 crankshaft. In order to mount the carbs with fuel bowls inboard and mixture screws outboard and accessible, the direction of pull for throttle linkage must change 90 degrees (from back to side) and then an additional 180 degrees (from upper to lower) and linkage for each carb must be individually adjustable. So throttle linkage will likely look like a Rube Goldberg affair when I'm done.

Anyway...... Even with the changeover to downdraught carbs, the Weber setup extends 10" towards the drivers side of the car from where it bolts to the 292 cylinder head. With the 292 engine in the same position as the 235 its replacing, that only gives me 1/4" clearance to the OEM '57 Chevy (non-power) single reservoir brake master cylinder......

Regarding hydroboost...... Are there any units that will mount so that the cylinder is rotated over to the side away from the engine? If I can work that out (clearance issue) for the brake master cylinder...... Maybe I can install a hydroboost for the hydraulic clutch master cylinder as well. I have no plans to add power steering to the '57, but I can always hang a power steering pump on the engine to run 1 (or 2?) hydroboost units.

Jack, I am still interested in the T-10 OD tranny if you still have it. Will be in touch when I have the bucks.

Found some pics of mods to the 2-piece intake on another thread. This should give you an idea of how it is configured. Each half of intake spaces it 5" out from where it bolts up to the 292 head, so need 10" side clearance on drivers side (plus) to clear brake master cylinder......

Well, this is turning out to be an interesting project.

Appreciate the suggestions for hydro-boost. If the hydro-boost unit can be clocked so as to rotate the piston from 10:00 to 2:00 o'clock position so it is on outboard side of engine bay (to solve clearance issue with long runner intake I built), I might be able to do that. However, have elected to go with a remote mount hydro-vac unit instead.

However, the VH44 unit is not made with piston size large enough to match my brake master cylinder, so managed to find a rebuilt remote mount hydro-vac unit for 1963 and 1964 Chevy C50 dump truck. This operates on the same principle as the VH44 unit, only its larger...... 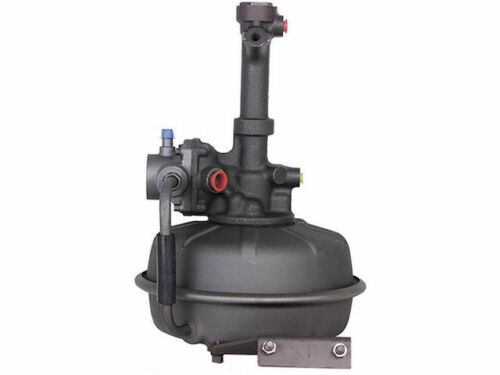 Next problem will be where to mount the 2 hydro-vac units. May need to move one or both of them to the trunk. The shelf above the rear axle would be a good place, but I usually mount a modified '62 - '64 Chevy gas tank there as an auxiliary tank when building a '55 - '57 Chevy. That gives a cruising range of 650 miles at highway speeds if both tanks are filled.

Engine is cammed for low to mid-range power and should have good manifold vacuum, but it would probably be a good idea to add a vacuum canister. Also...... I have a new early 1990s Cadillac electric vacuum pump around here somewhere. These used to be popular with circle track guys some years back. May as well use it. Will also look into pressure sensors to cut vacuum pump off and on as needed. Anyone have a source for these?

The saga continues. Should have titled this thread, 'As The Hydro-Vac Turns' or some such thing.

For the hydraulic clutch, will not be using the Aussie sourced VH44 unit after all. Scored a NOS Bendix remote power booster for '55 - '59 Chevy 2 ton truck still new in its original box last night. These Bendix power boosters are 7" diameter as well but longer than the VH44.......

And more compact than the Delco Moraine '63 C50 dump truck hydro-vac I will be using for the brakes. That one will have to go in the trunk for sure. Its huge......

You're pretty far down this road, but next time, remember, with the proper selection of brake components, power-assist brakes are not an absolute necessity on a car as light as your Chevy. I have several Studes out there running without and they stop quickly and easily.

I know, Jack. Actually, its not the car, its my knees. And back. And right shoulder. Too hard headed to use a walker. Get around on 2 heavy duty canes instead. Use a knotted rope over a beam in the garage to haul myself up and let myself down when I have to get under the car.

Just making allowances. Not a good candidate for knee replacement I am told. So doing what I can with what I've got.

Won't be a next time. Except for helping youngest son put together a new engine for his Camaro, this is my last build.

Ha! I thought this getting old thing was supposed to be a process...... Not an event! I do enjoy tossing a football to great-grandson, though.