at the suggestion of GM racing i had them do heads on my 79 Daytona 500 engine.
Top

289nate wrote: ↑
Wed Jun 13, 2018 2:00 am
In the mid 90's I had Valley Head Service rebuild a 289 engine for my '66 fastback. Decided to opt for some bowl work and a good valve job. The original guy who did the Shelby cylinder heads apparently confused my heads with another set and went to town on them with a full port job (intake and exhaust port along with the combustion chamber) and larger valves. All that is just to say they DID NOT have the engraving on the valve cover rail like yours have. So I'm confident in your claim about them being early and likely for the GT 350 R program. Not something done later down the road even when the same "he's old and gets confused" guy did them.

My personal opinion is that you will not be destroying the value due to the fact they eventually belong on an original GT 350 R that finds it's way to certain track events. Pull the valve cover and show the people. Don't have to pull the heads. Great pieces of Ford Racing history!

I was there around the same time talking to their "lead head porter" about doing some more work on my 429SCJ heads. I bet it was that same guy because he had a hell of a time conveying porting theory and flow terminology during basic discussion. I'm sure he was well past his prime but after watching him work a bit while talking.. he literally scared me right back out the door shouldering my parts.

@Tony. You were smart not to blow those intakes up past 1.90"s. Now you can shape a nice SSR without worrying about water. They also respond well to asymmetrical chokes with less radius on the long side and more on the ssr to seat transition due to such low apex height. Small word of caution, which you probably well know anyways but I'll still put it out there, once you go oversized valves in these thinner castings, the induction hardening is long gone and the seats will never last over the long run when the going gets rough. 6,000 rpm ain't much and won't need as much spring so you might have more margin. I've only done a few sets or more of those castings and the best rule I came up with was to run the valves face cut around .010" wider than the heads seat cut width. And also running the seats about .005-008"" narrower than you typically would, around .040-.045" also gives a bit of extra time till every thing pounds out and gets wider. Exhaust seats work decent around .050-.055" with slightly wider valve face cuts. I did a set with 1.90"s using .040" seats and matched cut faces(.050" seat/.050" face cuts exhaust) running old z28 springs and beat the snot out of it for about 2 years. Pulled it down to do some upgrades and the valves were recessing into the heads by a good .020" or more. Redid that set with the above spec's and ran it another 3 years. On pull down that valve face cut almost perfectly matched the seating surface after every thing had pounded into place. Might have gave up a tad bit of power, but considering what it was it didn't seem like much, and the power goes away much quicker when the sharp transitions build up as the valve recesses into the seat anyways. Just traded flow for longevity, is all. Either way you end up here.. pretty nostalgic stuff. Take lots of pic's for the owner to show off when he pops the hood at shows n track meets.

Yeah, I once put 1.94 valves in some 289 castings & learned the hard way it puts you close to water on the turns (sigh).

I use .040" seats, but I leave the seat about .015" in from the edge of the valve & dont backcut, plenty of room for the seat width to 'grow' over time. Starting out thinner means more time till it gets too fat provided you don't run out of valve face contact.
Top

I've freshened up many of those heads with that stamping on vc rail. They look purdy with all that polishing, but flow and performance not up to modern standards. They probably have some extra value to a hard core nostalgia nut.
Carlquist Competition Engines
Top

I think they would add more value to the car due to the history then just selling them outright and with the work your doing to them will make the engine perform even better makes the car value go up.
BORN RIGHT THE FIRST TIME
Top

Would you mind telling how you qualified and performed compared to the others.
BORN RIGHT THE FIRST TIME
Top

I contacted VHS via facebook, they confirmed these heads are the real thing.

Would you mind telling how you qualified and performed compared to the others.

I believe we qualified 12th in the 125 miler. built 2 engines 1 for practice, qualifying and the 125 but over heated that one in qualifying and had to run the race engine in the 125s and practice and lost a rod at 400 mile into the 500. we made it up to 10th before losing the engine. this was run out of a 4 car garage at a friends clothing factory. we were sponsored by a local coal stripper.
Top

Couple of pics after they were stripped & washed: 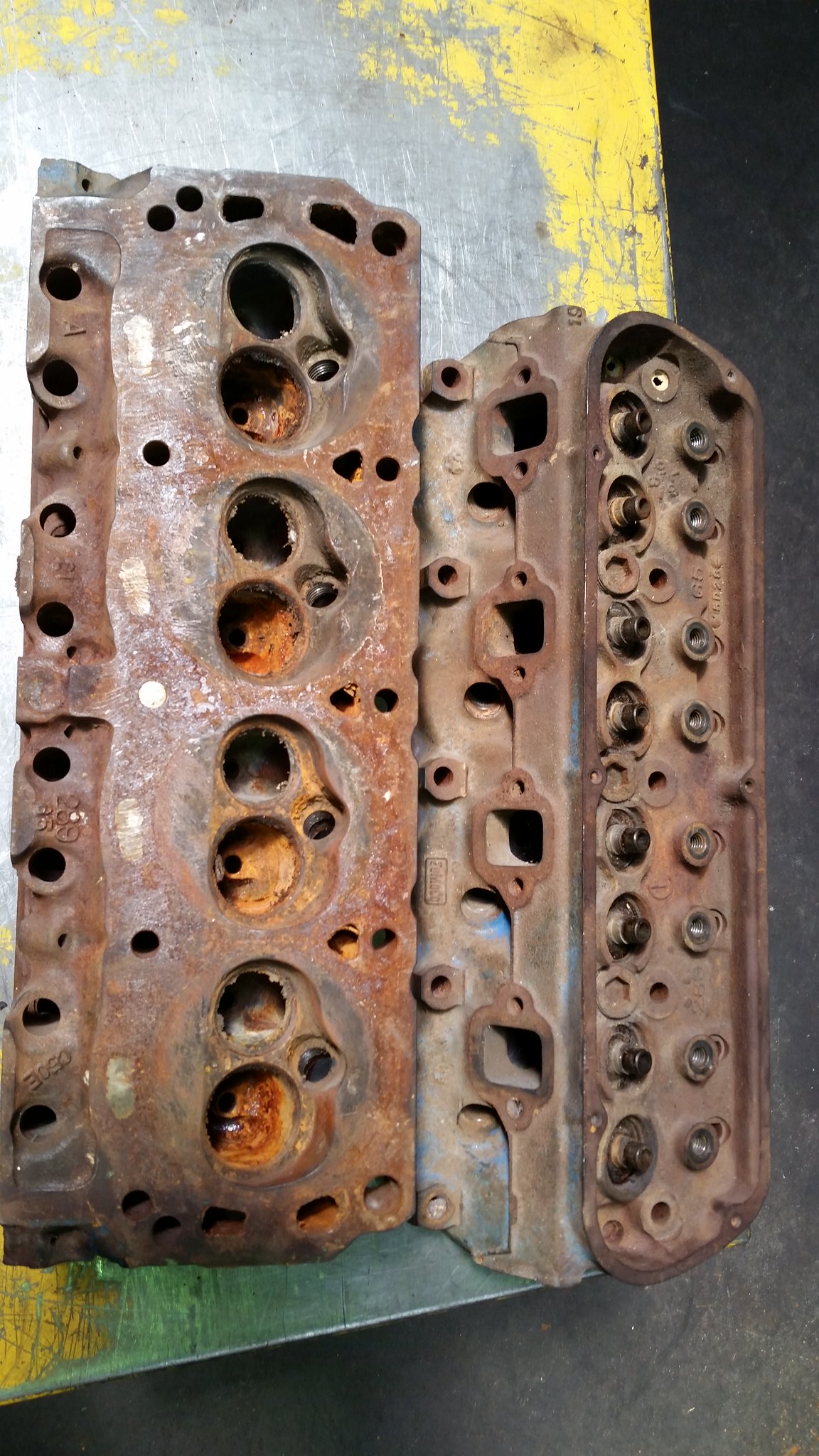 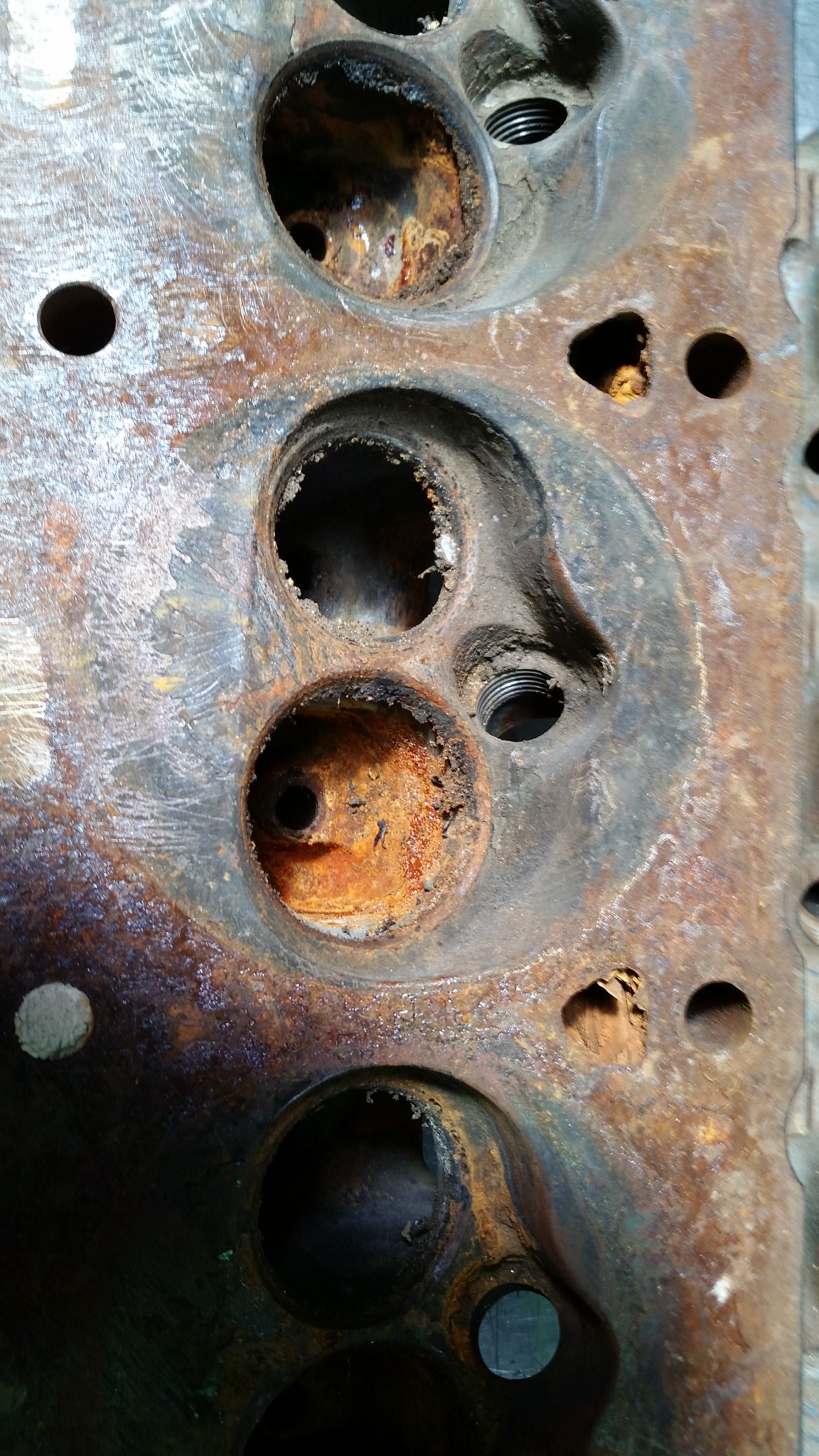 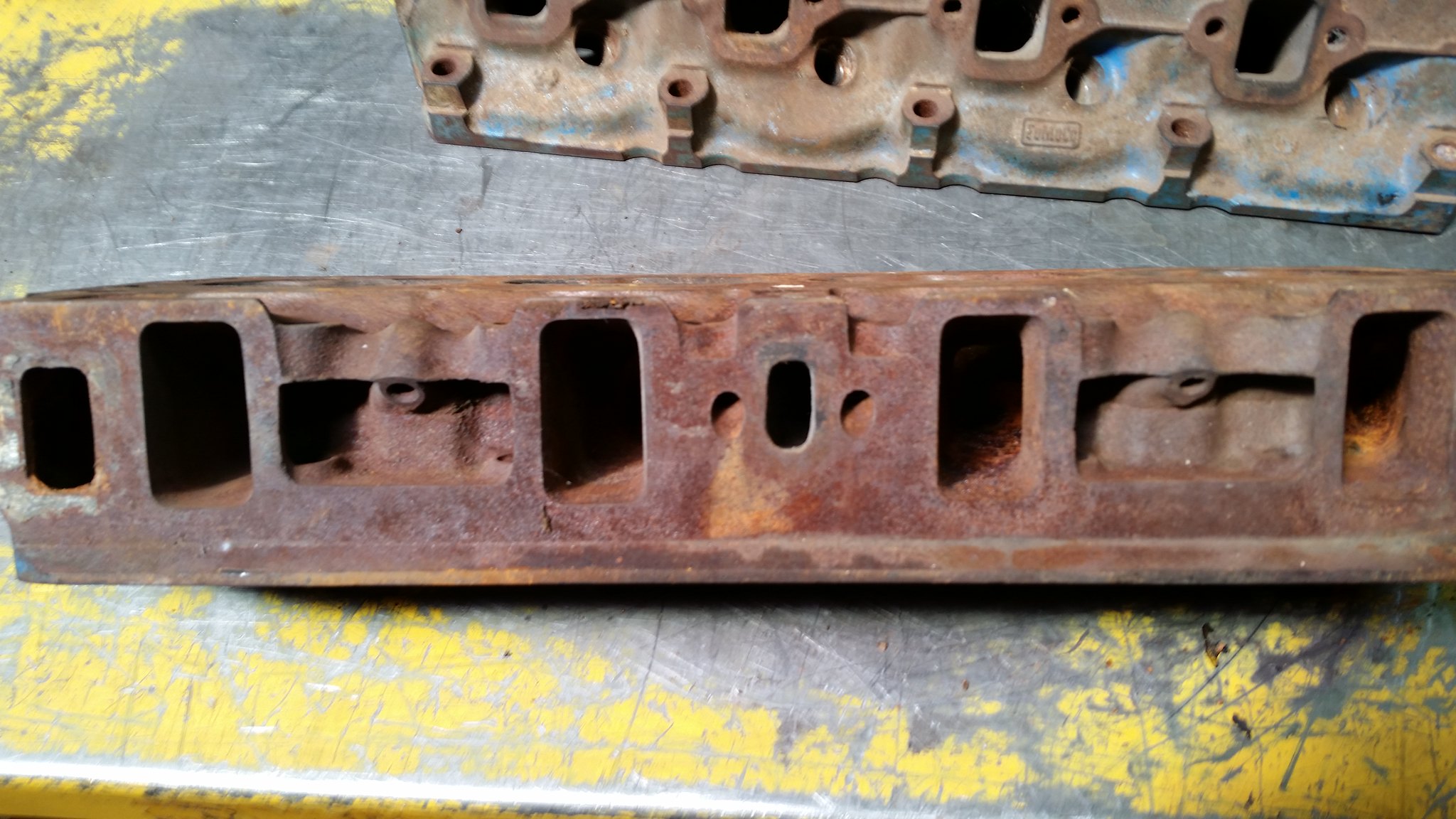 Lol.. looks like the set of hi-po heads I found half sunk in the mud many years ago.

These things make me feel nostalgic.. but if I never port another set in my lifetime.. it won't bother me one bit. And the exhaust ports ssr are almost sharp enough to cut fingers on.

No flowz for Charlie yet, waiting on valves, mid next week before I see them.
But done with porting & machining: 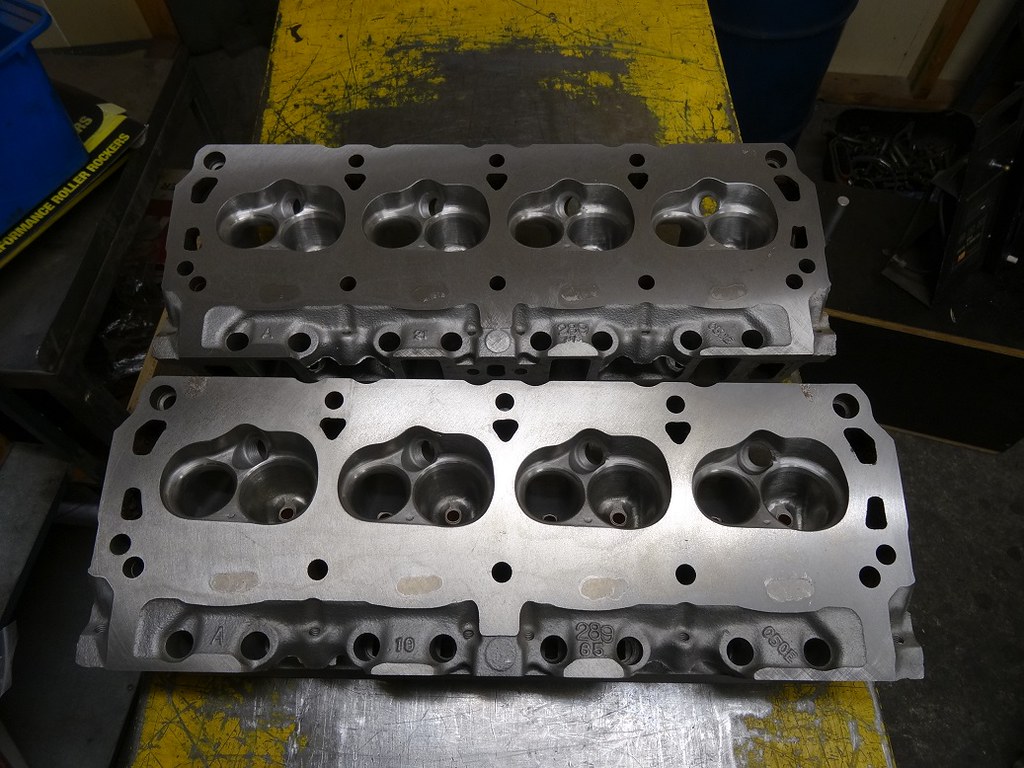 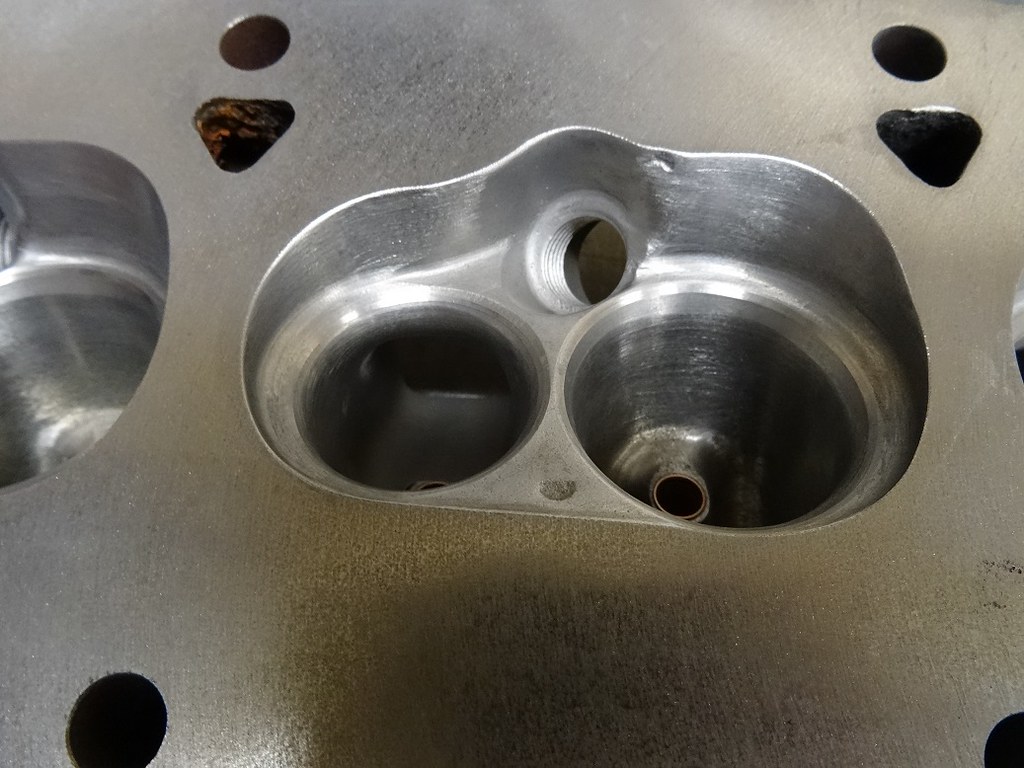 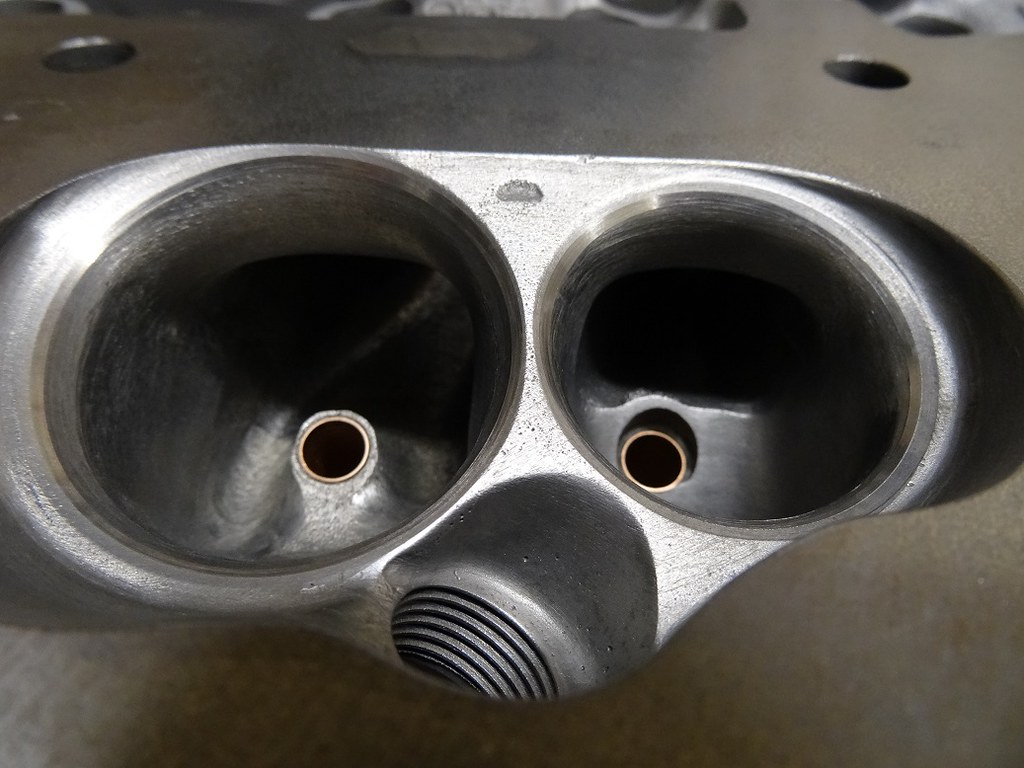 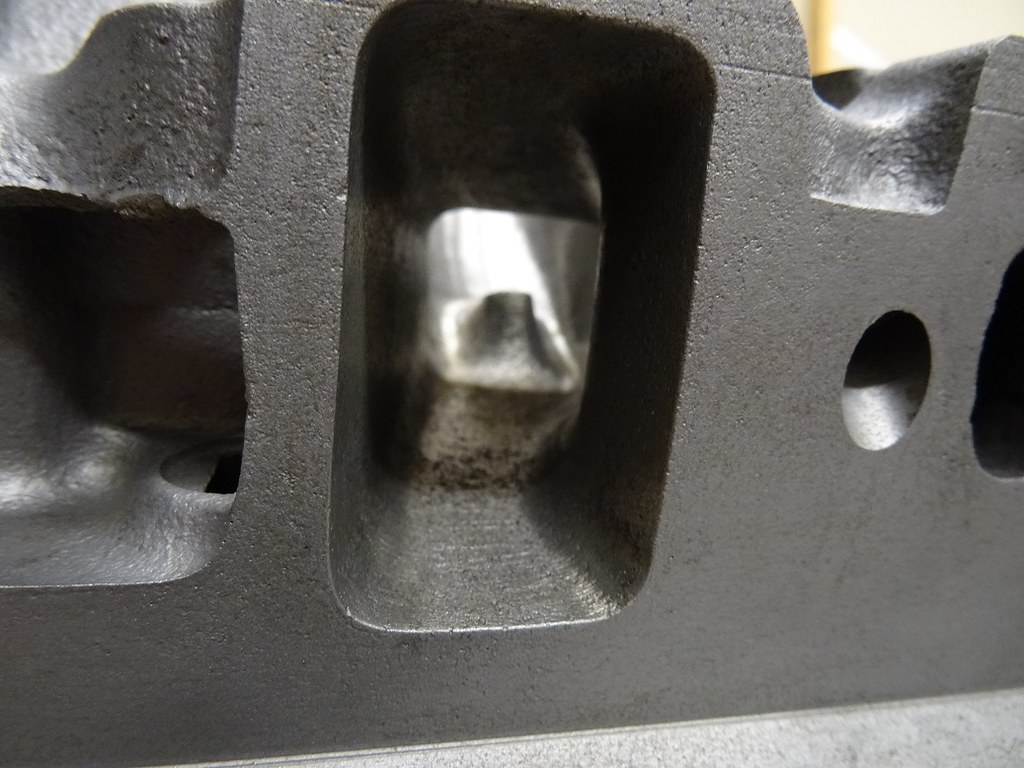 Did you use molasses on those TK?
Top

Great to see a bit of nostalgia being posted. Makes you wonder if these heads ended up being used in the 289 GT40 program.
Top

GT-40 #1 used a left over 1963 indy engine for power. Ford used their new C6FE head castings for the rest of the small block cars until they were replaced by the Gurney/ Westlake aluminum castings from what i have seen.
Carlquist Competition Engines
Top
Post Reply
110 posts