when are 3/4 grooved main bearings needed for bbc ?

I don't know either, don't have both in the shop right now. perhaps you could remind me.
Top

Something the SBM and Pontiac engines that he references, are missing also. 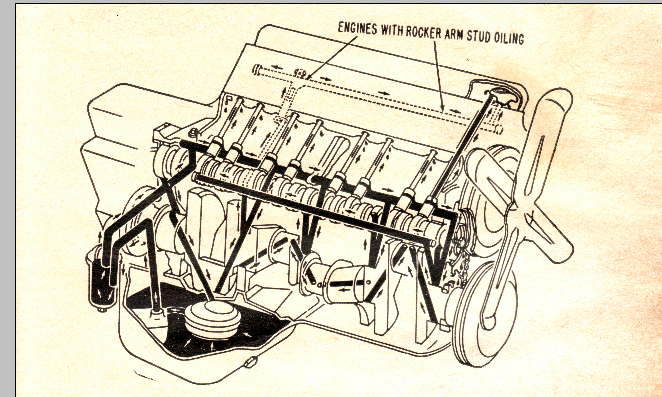 MOSTY older engines the oil went to the main gallery first and lifters second.....
because the oil was metered to the lifters/ valve train via a timed slot in the cam.
This was used instead of a simple restriction, because less likely to clog.

Many you can see how that was, but others like the pontiac, I just plain don't know what they were thinkin.

I have heard no complaint that LS engines lack priority oiling, not that it proves anything.
Top

Morning Jay,
The 340 example is actually a picture of a BBCrys. oil system, oil pump - dist. at front. 340 is at rear like chevy.

The citations in the papers yielded this patent that gives a better sense of the time expanse involved (applied for in 1941):

Some of the OEM engineers reading this post might be willing to comment on the use of tracers in following lubricant flow through an engine and monitoring pressure and aeration during operation. That information would be in the company's library containing their historic proprietary research.

It is clear that by 1975 such methods were being regularly employed at Mercedes Benz: https://saemobilus.sae.org/content/750051

My suggestion is that the lubrication systems were well tested according to each company's programme for their intended use. Their actual use by consumers surely exceeded that testing (various racing uses, for example, or using engines in marine applications).
SUPPORT THE RPM ACT

Morning Jay,
The 340 example is actually a picture of a BBCrys. oil system, oil pump - dist. at front. 340 is at rear like chevy.

If you take it one step farther, how much of the standard 180 degree groove is being used or could be eliminated.
Top

I believe one of the posters already commented that one can use less than 180* for the upper shell groove.

The SAE paper measured the angle used up to accelerate the oil from the feed passage to journal speed and that would provide a few more pages of posting on this topic if somebody spilled the beans.

It's kinda funny how a guy asks for input on his low power BBC crank bearings and he gets the history of OHV crankshaft and rod bearing oiling. Does he need help deciding between Clevite or King also? Coated or uncoated?

I found this interesting, not from rod oiling perspective but from the perspective of the potential benefits of shortening the main bearing groove:

As a note, I think the horsepower loss is in the units of what's lost in friction etc. in the 180-degree grooved main bearing. It's obviously not in the units of engine power. The direct gain from shortening the groove from 180 degrees to 140 degrees is minor, so I'd only consider this if the shorter groove allows one to change other main bearing design parameters (maybe a smaller main journal diameter?) that then give further gains.
Paradigms often shift without the clutch -- https://www.youtube.com/watch?v=cxn-LxwsrnU
https://www.instagram.com/ptuomov/
Top

Here are just a few of the design considerations for the oiling system in a particular V8 engine design. The article mentions many others including the decision not to use a pushrod system (it was tested). Solutions may seem odd or counter-intuitive when examined without knowing the testing conditions.


SAE 750051 wrote: ...
The adapting hydraulic adjustment of valve clearances to
high speed engines, described in the next section, defoaming
the oil is of prime importance. In order to determine the
amount of air contained in the oil, radioactive radiation is used
as a continuous analyzing method. It is based on the fact that
radioactive rays are attenuated when penetrating through a
given medium. The result of such an analysis is depicted in
Fig. 13 in the form of an oil foam diagram. These data were
obtained by testing a truck diesel engine on a tilting test bench.
The maximum uphill and downhill gradients simulated are 30
deg, the lateral tilts to the left and to the right are also 30 deg.
With passenger car engines lateral tilts up to 37 deg are tested,
which corresponds to cornering with a lateral acceleration
equaling 75% of gravitational acceleration. The foam percent
ages given here refer to an oil temperature of 80°C at standard
atmospheric pressure.

To comply with the necessity to avoid changes in design as
far as possible, it appeared to be logical to choose hydraulic
valve lifters of the suction type. Fig. 23 depicts two out of
five different designs tested. The first element, the intake
valve of which is located in the stationary part, draws in oil
from below. To ensure reliable oil supply, one oil storage trap
was arranged around two lifters at a time. Because of their relatively
large surface these traps permitted a satisfactory separation
of oil and air, so that the oil drawn in was relatively incompressible.
This element was extremely satisfactory as far
as stability at high speeds was concerned. No rattling noises
were noticeable when starting the engine hot, or from ambient
temperature. Initially, cold starts did not present any difficulties.
Difficulties did occur, however, after several cold starts
in succession. During warm-up after starting, that is, after a
temperature of approximately 40°C had been reached, valve
train rattle occurred, which only disappeared after a fairly long
time. This was caused by the high amount of fuel that had
dissolved in the lubricant as a result of the repeated cold starts.
When a certain temperature level had been reached, the fuel
evaporated, and the lifter became soft and flexible.

An intermediate experimental configuration is presented in
the upper half of Fig. 24. An oil pressure duct is located in the
cylinder head directly under the intake port of the lifters.
With this arrangement, air separation within the lifter is impossible.
If, however, oil foaming is eliminated by the measures
described earlier, this element is highly satisfactory as regards
both operation and production cost. Nevertheless, this lifter
also presented difficulties when the vehicle was parked on
gradients. The oil duct drained and this resulted in lengthy
valve clicking after engine start.

During the base circle phase of the cam, the rocker arm, as a
result of its transmission ratio, is forced against the cam by the
oil pressure in the hydraulic element. During this phase the
lifter is in stationary linear contact with the rocker arm, which
can lead to failure after a certain limit of contact pressure has
been reached. For this reason the pressure in the hydraulic
supply line had to be limited; this was first done as shown in
Fig. 25, upper half. The line through which lube oil is fed to
the camshaft is tapped with a restricting orifice. As soon as a
predetermined pressure level has been reached, a relief valve
opens, so that rocker arm durability is not impaired.
When testing this arrangement it was soon concluded that
this configuration was too complicated and that on was bled
unnecessarily. It was therefore attempted to find a location in
the oil system where a comparatively low oil pressure prevails
under all conditions. As can be seen in the lower part of Fig.
25, such a point was found on the last camshaft bearing
bracket, where the pressure was sufficiently low due to the oil
used by the camshaft bearings and the cams. During cold starts
the engine oil pressure reaches values of up to 10 bar, in the
pressure line for supply of the lifter; however, the pressure
never exceeds 4 bar. Normally its pressure is 2.5 bar.
This configuration has another decisive advantage, that is,
due to the low oil consumption of the lifters, the flow rate in
the pressure line is negligible, so that air carried along with the
oil can move up and escape via the bearing bracket. Measurements
taken on the tilting test stand have shown that under all
types of extreme driving conditions the lubrication system
worked reliably without taking any additional precautions;
this was not always the case with the first configuration. If
suitable action, as described earlier, is taken to defoam the oil
in the sump, in the supply line to the lifter, and in the lifter
itself, reliable performance is guaranteed also at very high engine
speeds. ...